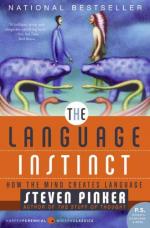 Everyone has questions about language. Some are from everyday experience: Why do immigrants struggle with a new language, only to have their fluent children ridicule their grammatical errors? Why can't computers converse with us? Why is the hockey team in Toronto called the Maple Leafs, not the Maple Leaves? Some are from popular science: Have scientists really reconstructed the first language spoken on earth? Are there genes for grammar? Can chimpanzees learn sign language? And some are from our deepest ponderings about the human condition: Does our language control our thoughts? How could language have evolved? Is language deteriorating?  Today laypeople can chitchat about black holes and dinosaur extinctions, but their curiosity about their own speech has been left unsatisfied—until now. In The Language Instinct, Steven Pinker, one of the world's leading scientists of language and the mind, lucidly explains everything you always wanted to know about language: how it works, how children learn it, how it changes, how the brain computes it, how it evolved.  But The Language Instinct is no encyclopedia. With wit, erudition, and deft use of everyday examples of humor and wordplay, Pinker weaves our vast knowledge of language into a compelling theory: that language is a human instinct, wired into our brains by evolution like web-spinning in spiders or sonar in bats.  The theory not only challenges convention wisdom about language itself (especially from the self-appointed "experts" who claim to be safeguarding the language but who understand it less well than a typical teenager). It is part of a whole new vision of the human mind: not a general-purpose computer, but a collection of instincts adapted to solving evolutionarily significant problems—the mind as a Swiss Army knife.  Entertaining, insightful, provocative, The Language Instinct will change the way you talk about talking and think about thinking.  New in 2007: The new “PS” edition contains an update on the science of language since the book was first published, an autobiography, an account of how the book was written, frequently asked questions, and suggestions for further reading.